Why willpower and skills are not enough to sustain achievement in Work?

I met Adi last month. This is his story.

Adi is working in a quite large private bank in India in a town closer to Mumbai. He did his Engineering and MBA from one of the Tier II MBA institutes in Pune. He passed both degrees with first class. He joined as Relationship Officer (RO) for small and medium business (SMB) accounts from his college. He has been working as a RO for last one year whose job is to find SMB accounts and give them loans. His bank had given him a target of disbursements to SMB accounts.

He is attached to one of the local branches of the bank in the town. He had worked hard. He used to make a dozen cold sales calls in his territory, he connected with all the current account opening officers in his territory although the bank did not encourage it. He followed various trails triggered by the database of accounts which ended in dead ends. He almost signed up three/four accounts which did not get sanctioned because of bank policy.

When asked for more information, he shared that none of 8 ROs , who joined last year, achieved their targets. Only one managed to sign one new account, which got sanctioned, but not disbursed.  He was tense because he had not signed a single account in one year and wanted to 'leave' the bank before bank 'pushed' him out.

What would you advise him?


Seeing through the lens of Enlight output framework 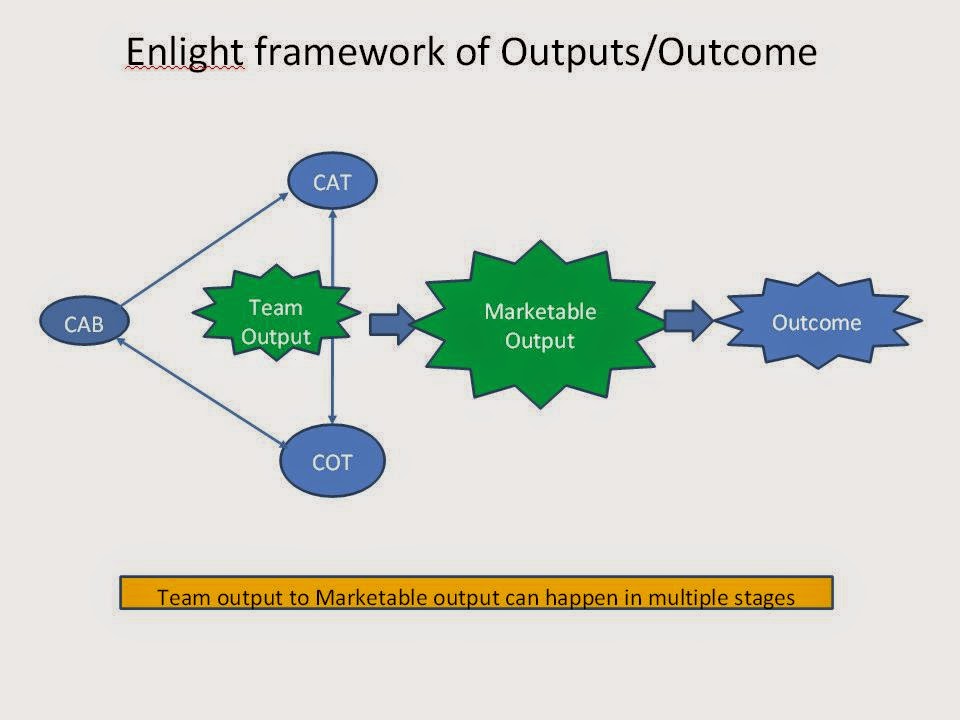 A person uses his inputs cognitive abilities, character traits and conative traits to produce results. But what happens when a person cannot produce results, because the output-producing system of the organisation is defectively designed ?

When I checked with Adi, i realised that the 'team output' system of his bank was 'designed' to ensure that the result cannot be easily produced. ( Surprisingly, this is quite common in organisations !) For instance, branch had no targets of signing new SMB accounts so there was no interest for branch managers to cooperate with ROs. Officers opening Current accounts were not supposed to share data with ROs.  And more importantly, the 'type' of the service being sold was not compatible in producing the desired result

For instance, a bank can have the targets of  'opening of accounts'. But bank cannot have targets for opening new loan accounts to lend loans? It is like doctors trying to sell their 'advice' by meeting patients door to door. In other words, the service of  opening new 'loan accounts' cannot be sold by making cold calls. Such kind of service-selling requires 'indirect approach' ( like calling customers in seminars they may be interested) which consultants like Mckinsey use. Whatever new accounts the bank was getting, it was due to chance encounters triggered by lucky events ! In short, when a system is inadequate to produce the desired result, it is almost impossible to perform in your role, whatever your willpower, skills or motivation !

But what happens when Adi does not use a framework to guide his work-achievement?

Like we discussed in the earlier blog, one pays the the price if one is not using a framework to guide one's actions in career.  Without knowing the result framework, Adi's mind concluded that he is a poor performer. Even after knowing that 8 other ROs have not performed in their roles did not help him change his mind. And he felt so bad, that instead of convincing his bosses to change the 'badly designed system', he wanted to 'resign' In absence of a result framework, automatic sense-making apparatus of his Mind made him conclude that he is a poor performer. Instead of Mind directing him, it starts getting directed by this automatic sensemaking.

Surprisingly this automatic sense-making of Mind further leads to another error ! When i asked Adi where does he want to go after leaving his current job, he said he is planning to join a Nationalised bank ( because he had already given exams for those!). But, unaware of the result-producing systems, he does not even know that many of the result-producing systems in Nationalised bank are designed to 'not perform'. In other words, Adi may join another similar bank with poorly designed output system, and realise later that he has moved from one 'ditch to another'. More importantly, this will further hurt his already weak 'internal confidence'. He may start questioning his own calibre. Even if he is lucky to find another job later, he will take long time to believe in his capability and revert back to normal use of his 'skills and knowledge base'.

Without a Result framework, even successful professionals suffer sooner or later

Lack of Result-oriented framework like Enlight also affects those who achieve desired results. Without knowing how the output system benefited their individual performance, good performers believe that their performance was good because of their skills, hard work and willpower. Infact, i meet many such individuals who perform well due to the 'rightly designed output systems' for so long a time that their 'Minds' start believing they can do anything. They suffer from grandiosity and overconfidence !

They are inflicted with Virendra sehwag syndrome. Not bothering to know how systems help them achieve their results, they conclude that they are doing everything right. This does not expose their weaknesses and therefore does not give them a chance to correct their flaws. So when they fail, they are surprised and take long time even to acknowledge their own flaws. They get stuck.

On the other hand, if you understand the framework of producing results in your work, you become aware of the result-producing systems. You understand the way in which the system ( i.e through the colleagues present in the system ) is filling the skill-gaps. You discover the 'policies' which are motivating all the system elements to produce the desired result. In short, you understand your exact contribution in producing the result, as well as the system's contribution. This enables you to take both the approaches: either pick the right system that complements your skills, or appreciate the gap in your skills and strive to gain that skill. With a framework of work-achievement, your mind is in the driver seat, it is the director, not at the mercy of someone else. And only when your Mind is a director, you can achieve anything meaningful in life.

Do you still want to manage your work-achievements without a framework?